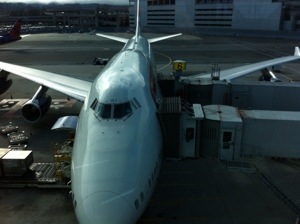 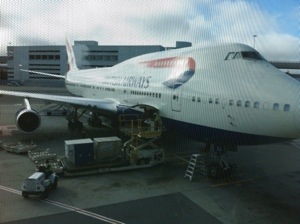 First things first: Online check-in went quite easily on the iPad and the hotel wireless.

This being a family trip and me being the only one travelling enough for it to make sense to have the BA app on the phone, we came to the airport (45 min later than anticipated due to a late San Francisco City Shuttle pick up – grrrrrrrr) needing three boarding passes printed and four bags dropped.

Which ended us in an odd limbo (the Dante / First Circle kind, not the dance…). We dutifully printed boarding passes from a kiosk and then got in the bag drop queue. Maybe we should have wondered why we were the only ones in that one… 😉

There was one economy counter manned (out of something like six) – and four business / first counters (missing my Star Alliance status? You bet!). The economy lady kindly told us that we’d be taken care of by the “high end” – it could have been an assumption as it just didn’t happen. They either had looong check-in procedures or got fresh customers in the priority check-in line. And meanwhile, the economy lady took passengers from the economy check-in assistance queue. Which left us looking left and right, right and left, for someone to wave us over. Didn’t happen.

Eventually, 3-4 BA people came walking down and started procedures of getting some counters up and running. Then, the first one of them waved people over – from the economy check-in assistance queue… WTF? At this point, I found someone to ask if it was customary that people actually doing as the signs said by going to the kiosks first were just overlooked?

That got their attention and a newly opened counter got us processed quickly. But I did have the notion that the guy behind the counter found our question a bit on the inappropriate side…

The incoming 747 was late – leading to an announced half hour delay in departure, 10 min delay on arrival. As our connection was from the same terminal, the original layover was 1 1/2 hours and luggage thankfully can be checked through to the final destination, unlike in the US, at departure time that sounded alright. (Note: once again, using the Tripit Pro service had us aware of this before leaving the hotel – and could inform us of an alternative flight less than two hours after our scheduled connection. Could have meant a difference if the delay had been, say, an hour.)

The trip itself – actually, BA’s onboard service is pretty decent. The steward/purser/whatchamacallit who worked my aisle (aisle seat in the middle 4-block, remember? Only this time it was because we were actually four of us) was absolutely brilliant – Scottish by the sound of it and with nice, dry humour. Just one example: When serving drinks, he asked me if I wanted any wine with dinner. My immediate response was “I haven’t seen the choices on the menu yet…”- anticipating to sort of hear what the choices would be. His answer? “Well, as a matter of fact, neither have I…” 😉

We did have a few grieveances, though. My seatback had some hard thingy protruding a bit inside it around mid-way vertically – right where my spine would like to be. The crew couldn’t really fix it or move me in a full plane – the workaround with an extra pillow pretty much helped, though. Next, on the other aisle, my daughter’s entertaiment system presented only “a million black ants on white” – I am not sure whether or not she actually ever got feedback from the crew about it. Certainly no fix was done – so she and my wife changed seats in order for her to watch a movie.

We were late out of SFO and, after a mandatory bit of holding pattern around London, also late into LHR, albeit not too much. And certainly nothing that made us miss our connection – even in spite of seriously labourious and slow security (re-)processing of bags, though.

So, all in all a fair but not really good flight – for that, especially the check-in procedure mayhem and the annoying part in the seat back subtracts too many points. Things that actually should be quality-system avoidable, too.

Good cabin crew service pulls up, seats and screens with malfunctions pull down as does the haphazard queue handling at the airport. The latter is actually something I have seen before with BA and consider an unfortunate habit of theirs – so it weighs more than it probably could on the score. As said, it should be something that you can plan your way out of. So, a three – that had the potential of being a four but didn’t quite get there: